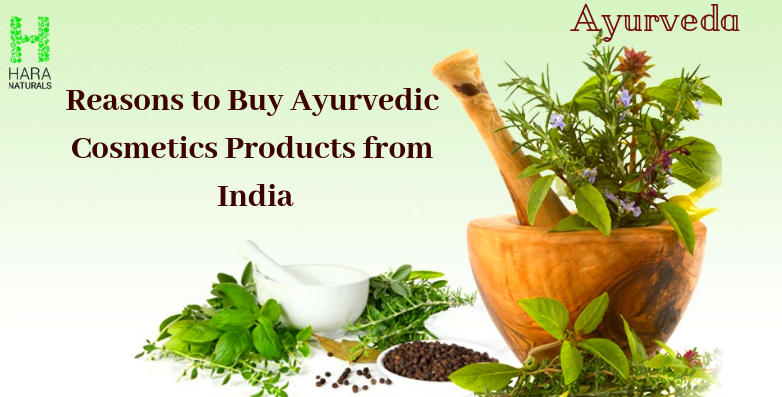 Ayurveda is one of our oldest collective heritages. It was a system of medicine that was developed in ancient times. Once considered the definitive text in treating and ornamentation of the body, Ayurveda had seen a decline more in the modern era with the onslaught of chemical-based conventional cosmetics. These cosmetics were more easily available, priced reasonably and pushed by extremely forceful marketing companies.

However, ayurvedic cosmetics have made a comeback in recent years. Backed by a number of entrepreneurs with modern packaging, Ayurveda is now the new buzzword. As a result, we are now seeing a revival of interest and buying of these Ayurvedic Cosmetics in India. The reasons for this revival are many, including the positive that Ayurveda offers. These are:

Ayurveda believes in a holistic approach to health. It believes that we cannot look good if we are not spiritually, mentally and physically healthy. Its emphasis lies in healing and strengthening the body. But ornamentation was seen as equally important. A healthy body also looked good. But more importantly, to look good one had to be healthy from within.

Ayurvedic formulations reflect the same philosophy. It uses ingredients that are beneficial for the body and not just for emphasizing one’s looks. In other words, you can look good and your body remains healthy and strong. Many of the Ayurvedic formulations were designed so that they supported our overall health.

Conventional cosmetics use a number of chemicals. If you check the ingredients, your simple face cream will seem like a mini-laboratory. But did you know that many of these ingredients have serious side effects? Many are even considered carcinogenic. These chemicals accumulate on your skin, scalp and other places, their effects increasing with time. They are also harmful to the environment. When we wash our face or hair, these same chemicals wash away into the earth, harming it further.

Natural elements rarely have any such side-effects. While some people may have certain allergies, by and large, natural elements do not harm the body. Many of the Ayurvedic Cosmetics in India is actually made of foods that you eat! Far from harming your body, their regular application can actually benefit you.

Ayurveda was born, developed and followed in India. It is an indigenous science that was developed by our sages. But should it matter? Yes, and not just because you will be supporting your own heritage! Since Ayurveda developed in India, it uses elements that are widely found around us. These are formations that are deeply in sync with the land, air, and weather of the country. It was also devised for the indigenous people with their unique lifestyle, their culture, and body composition. In other words, it was developed specifically for people like us!

Many of the Ayurvedic formulations mirror the ‘old wife tales’ that we’ve learned from our grandmothers, mothers, and aunts. These ‘tales’ could have come from the Ayurveda or vice versa! At any rate, these are beliefs and recipes that have passed through generations because they work. A simple anti-pimple recipe that you can now buy under Ayurvedic cosmetics probably sounds very much like a hack you learned from an elder. These cosmetic formulations have survived for centuries because they are effective and nourishing.

The biggest benefit of Ayurvedic cosmetics is that these heal us from inside. Since Ayurveda was based on a holistic approach to life, every cosmetic was designed to make you strong and healthy. Creams, shampoos, lip balms were not just meant to give your skin a superficial glow, but also heal and repair them from within. This is why many of the ingredients used in Ayurveda were found to be high in antioxidants in new studies.

This Ayurvedic Cosmetics Products from India is often antimicrobial, anti-inflammatory and rich in naturally occurring vitamins and nutrients. Many of these simple formulations will leave your skin nourished; heal it from within, treat maladies like acne and sunburn while fighting signs of aging! These are powerful formulations that ensure your skin, hair, and body not only looks good but remains healthy and strong from within. So, why not try these Ayurvedic cosmetic products.

« 7 Best Must Have Hair Care Products For…
Profile

Login to quote this blog

You cannot quote because this article is private.